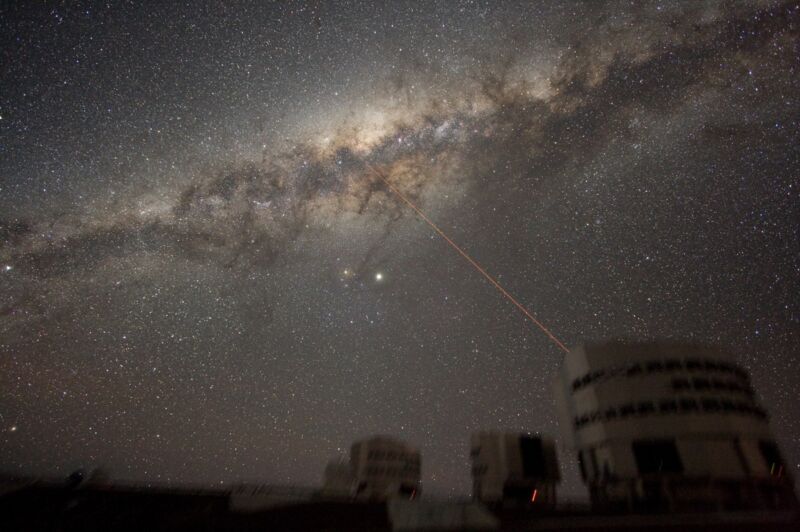 Enlarge / Image of the night sky above Paranal, Chile, on July 21, 2007, showing the galactic center of the Milky Way. The laser creates a guide-star for the telescope.
European Southern Observatory/Y. Beletsky

The 2020 Nobel Prize in physics has been awarded to Roger Penrose “for the discovery that black hole formation is a robust prediction of the general theory of relativity.” He shares it with Reinhard Genzel and Andrea Ghez “for the discovery of a supermassive compact object at the centre of our galaxy.”

Penrose, the Emeritus Rouse Ball Professor of Mathematics at the University of Oxford, will receive half of the 10 million Swedish kronor (more than US$1.1 million) prize money. He helped solidify the theoretical foundation for black hole physics in the 1960s by providing the seminal mathematical proof that black holes were a direct consequence of general relativity.

Genzel is acting director of the Max Planck Institute for Extraterrestrial Physics in Germany and a professor at the University of California, Berkeley, while Ghez is a professor at the University of California, Los Angeles. They will each receive one-quarter of the prize money. Genzel and Ghez each lead astronomy groups that have mapped the orbits of stars closest to the center of our Milky Way—a region known as Sagittarius A*—giving us the best evidence to date that there is a supermassive black hole at our galaxy’s center. That work was aided immeasurably by the development of advanced adaptive optics tools to counter the distorting effects of the Earth’s atmosphere.

“The discoveries of this year’s Laureates have broken new ground in the study of compact and supermassive objects,” David Haviland, chair of the Nobel Committee for Physics, said in an official statement. “But these exotic objects still pose many questions that beg for answers and motivate future research. Not only questions about their inner structure, but also questions about how to test our theory of gravity under the extreme conditions in the immediate vicinity of a black hole.”

Black holes have a precursor in the “dark stars” hypothesized by John Michell in 1783 and Pierre-Simon LaPlace in 1796. In a 1783 paper in the Philosophical Transactions of the Royal Society, Michell argued that, according to classical (Newtonian) mechanics, a star about the same density as our Sun, but a radius 500 times larger, would generate such a strong gravitational pull that light itself would be trapped. LaPlace made similar calculations in his own 1799 paper.

Our modern concept of a black hole dates back to 1916, when Albert Einstein’s general theory of relativity was brand new and revolutionizing our understanding of gravity. Einstein envisioned a space-time that is curved, not flat, and hence gravity is not so much a force as it is space-time that has been bent out of shape by the presence of mass or energy. How much mass or energy is present determines the degree of curvature, and the more it curves, the stronger the gravitational pull. Since space and time are one, what happens to space also affects time: as space is warped, time is stretched or compressed accordingly. Therefore, time slows down in direct proportion to the strength of a gravitational field, and that field’s strength depends on distance. 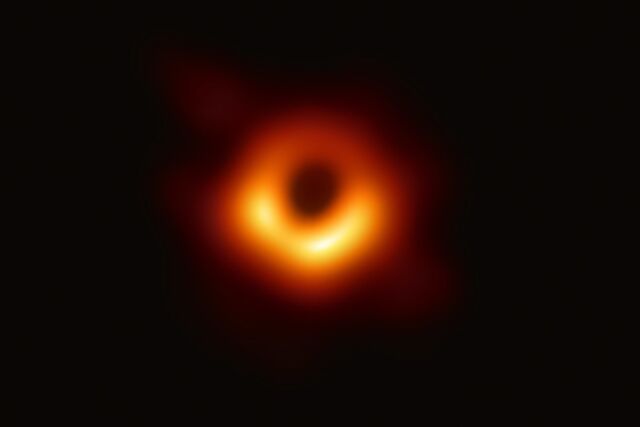 Enlarge / Last year, the Event Horizon Telescope captured the first image of the supermassive black hole at the center of the Messier 87 galaxy.
EHT Collaboration

Einstein’s equations opened up an entirely new realm of theoretical possibilities. A physicist named Karl Schwarzschild began fiddling with different solutions while under heavy gunfire at the front during World War I, just after Einstein published his seminal paper—his way of taking his mind off the horrors of war. Schwarzschild eventually hit a roadblock where the equations “blew up,” and his work provided an early description of a black hole. (Robert Dicke coined the term in 1960, and John Wheeler later helped popularize it.) An extremely heavy mass can cut off a piece of space to form a black hole, surrounded by an event horizon—a hypothetical point of no return beyond which nothing can escape (not even light). The greater the mass, the larger the black hole and the larger the diameter of its event horizon.

Initially, physicists considered these exotic objects to be purely theoretical, although Robert Oppenheimer and his student Hartland Snyder crunched some early calculations showing that massive stars, many times more massive than our Sun, could dramatically collapse to form black holes. “The star thus tends to close itself off from any communication with a distant observer; only its gravitational field persists,” they concluded. However, the general consensus was that this was not a realistic model for something that could actually form in our universe. Then physicists discovered quasars in the 1960s, the brightest known objects in the universe. The source of all that radiation, scientists concluded, had to be matter falling into a massive black hole. So black holes might be “real” after all.

Roger Penrose decided to tackle the problem of demonstrating how black holes might realistically form and later recalled the moment he reached his key insight in the fall of 1964. Strolling through London while visiting a colleague, he envisioned a “trapped surface”: a closed, two-dimensional surface that directs all light rays to an infinitely dense center—what we now call the singularity, where time and space end inside a black hole. Penrose went on to show—using his eponymous Penrose diagrams, among other tools—that once such a trapped surface has formed, under general relativity, nothing can stop the inevitable collapse toward the singularity.

Journey to the center of the Milky Way

Establishing a solid theoretical foundation for the existence of black holes wasn’t the same as directly observing one, however. Our Milky Way is a flat disc measuring roughly 100,000 light years across, and our Sun is just one of several hundred billion stars within it. Physicists had long thought there could be a supermassive black hole at its center, bolstered by the discovery of radio waves emanating from that central region known as Sagittarius A*. So it seemed like an ideal candidate for further investigation.

2020 Physics Nobel Laureate Andrea Ghez is the fourth woman to be so honored in the 119-year history of the prize. She also indirectly inspired the so-called “Finkbeiner test” regarding gender bias in science writing, created by science journalist Christie Aschwanden. It’s named after science writer Ann Finkbeiner, who penned a 2013 personal essay about her decision to profile Ghez for Nature while being “blindly, aggressively, egregiously ignorant of her gender.” To pass the test, a story cannot mention:

But how, exactly, does one “observe” an object from which no light can escape? It must be done indirectly, by measuring the gravitational effects such an object would exert on objects near it—such as the orbits of nearby stars. This must be done with Earth-based telescopes making observations in the near-infrared, since any light in the optical spectrum would be obscured by interstellar gas and dust. The finer the scale at which one can track those motions, the easier it will be to make the required calculations.

Beginning in the 1990s, Genzel’s team relied on the European Southern Observatory’s telescopes in Chile, most notably the Very Large Telescope array. Meanwhile Ghez’s team relied upon the Keck Telescope in Hawaii.

The work was painstaking, time-consuming, and hampered by the turbulent effects of Earth’s atmosphere. Genzel and Ghez and their respective teams developed a technique called “speckle imaging” to address that challenge. It involves taking several highly sensitive, short exposures of a given star and stacking that data together to produce a sharper image. But this only proved effective for the brightest stars orbiting Sagittarius A*, and it also took years to glean the needed information about the velocities of a handful of those stars.

The emergence of adaptive optics in the late 1990s proved to be the game-changer. This involves using a “guide star” as a first point of observation—either an actual star, or an artificially created point source, which can be achieved by using a powerful laser to excite sodium atoms in the upper atmosphere. Once the position and brightness of the guide star has been determined, that information can be used to calculate the effects of atmospheric turbulence. This, in turn, enables astronomers to use rapidly deformable mirrors to compensate for the distortion.

The use of adaptive optics allows for longer exposures, so more stars can be observed at much greater imaging depth. The two teams could monitor the motion of some 30 bright stars near Sagittarius A* over a much shorter time scale. Both were able to image and analyze one star in particular near the galactic center—S2, which completes an orbit in just under 16 years (compared to the 200 million years it takes for our Sun to complete its orbit around the Milky Way’s center)—and their data matched perfectly. Conclusion: the object at the center of the Milky Way is a supermassive black hole. 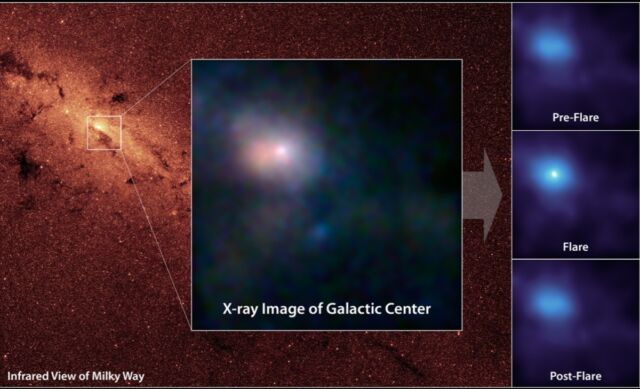 Enlarge / NuSTAR captured these first, focused views of the supermassive black hole at the heart of the Milky Way in high-energy X-rays.
NASA/Pubic domain

“The research on the dark universe, once an exotic subject, is getting more and more mainstream,” Giovanni Losurdo of INFN, spokesperson of the Virgo Collaboration, said in a statement responding to the prize announcement. “In fact, the discovery of gravitational waves announced in 2016 was also the first direct detection of a black hole ever. Since then, Virgo and Ligo have detected dozens of binary systems of black holes, allowing us to take a closer look at the physics of these still partly mysterious objects and at the mechanisms of their formation. This year’s Nobel Prize encourages us to continue on the path already taken by our research.”

Editor’s note: In the wake of last year’s prizes, we started a discussion about the prizes. The end result was that we decided to do quicker coverage on the day of the award and look into whether there were any facets of the work that merited deeper coverage that could be done later. As of right now, we don’t see anything about this year’s physics prize that would suggest more detailed coverage would be informative for our readers.

Gene-editing tool gets its inevitable Nobel