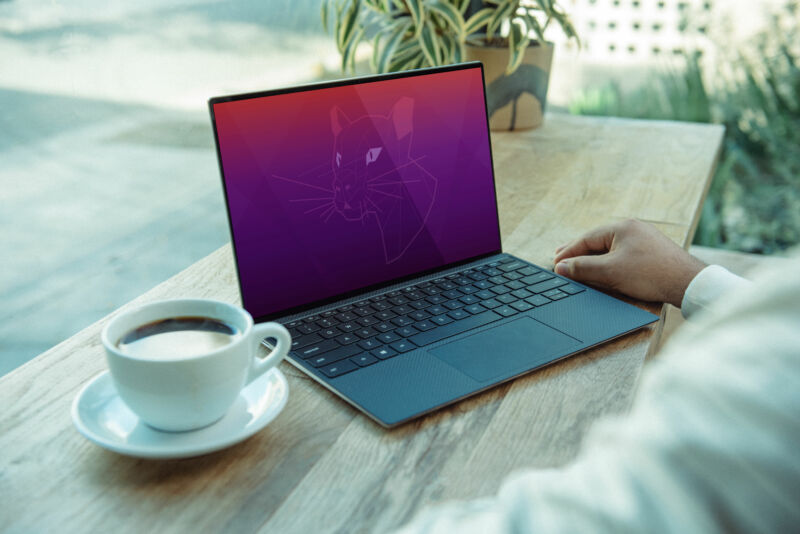 Enlarge / Ubuntu will be available and supported even for XPS 13s, which weren’t bought as “Developer Edition” this time around.
Dell

The latest update to Dell’s XPS 13 product line will be available beginning Wednesday, September 30, and will feature 11th-generation Intel CPUs, aka Tiger Lake. We know a lot of AMD fans are going to be disappointed at no Team Red option—honestly, we’re a little disappointed, too; we’ve been extremely impressed with this year’s AMD Renoir laptop CPUs.

However disappointed AMD fans might be, Tiger Lake represents a pretty massive upgrade from last year’s Ice Lake and Comet Lake lineup, as we saw directly when we had the chance to test a prototype Tiger Lake laptop earlier this month. The four core/eight thread i7-1185G7 we expect in the highest-end XPS 13 models might not be a match for an eight core/sixteen thread Ryzen 7 4800U—but it hangs pretty even with an eight core/eight thread Ryzen 7 4700U, even on massively multithreaded workloads.

Meanwhile, not every workload is massively multi-threaded—and the Tiger Lake i7 we tested demonstrated extremely fast single-threaded performance. More importantly, its Xe integrated graphics were far and away the highest performing iGPU we’ve ever seen—they aren’t ready to take the place of a gamer’s Nvidia RTX series discrete GPU, but we suspect they sounded a death knell for Nvidia’s cheaper MX series of discrete laptop GPUs.

Although Dell hasn’t come right out and said it, we expect the new XPS 13 models to also be qualified under Intel’s Project Evo platform brand. This means extremely fast boot and wake-from-sleep times, very long battery life—which must be achieved under high performance settings—and fast charging. Dell has specifically targeted 19 hours’ runtime for the Dell XPS 13 and XPS 13 two-in-one, with a slightly more modest 18:40 for the Linux-powered XPS 13 Developer Edition.

A closer look at the lineup

One of the coolest things about the new XPS 13, in our opinion, is that it and the XPS 13 Developer Edition are no longer truly separate hardware. Dell is now allowing users to install Ubuntu 20.04 LTS on XPS 13 laptops that weren’t purchased as Developer Edition without losing their factory warranty and support.

Apart from that, you’re looking at a very sleek, small laptop that takes a “quality over quantity” approach to ports—the only ports it offers are two Thunderbolt 4/USB-C (one on each side), a 3.5mm headphone/mic combo jack, and a microSD card reader.

The good news is, both TB4/USB-C ports support Power Delivery and DisplayPort—so you’ve got options, but you’ll need a dock to connect any USB-A gear such as mice, keyboards, or standard thumb drives. (Dell includes one USB-C to USB-A dongle, but we suspect most people will need more options pretty quickly.)

In addition to the standard XPS 13 and XPS 13 Developer Edition, there’s an XPS 13 two-in-one. If you’re not familiar with that form factor, it’s a “convertible” laptop—a 360-degree hinge allows you to fold the screen around entirely, after which you pretend the keyboard doesn’t exist and interact solely with its touchscreen.

For the most part, the XPS 13 two-in-one is just a convertible XPS 13—but the greater size constraints limit CPU options a bit; the two-in-one tops out with the i7-1165G7. Thankfully, the RAM can still go all the way up to 32GiB—though, as with the standard XPS 13, you’d better order it the way you want it; the RAM is soldered to the board and not upgradeable or replaceable later.

The XPS 13, XPS 13 Developer’s Edition, and XPS 13 two-in-one are all available starting September 30 in platinum exterior/carbon interior trim. Both machines will be available in frost exterior/arctic white interior trim later. At launch, all XPS 13 variants will use the Killer AX1650 Wi-Fi 6 chipset, based upon Intel’s AX200.

At a later date, some models will be available with Killer Wi-Fi AX500-DBS, which is instead based on Qualcomm 6390.

Can Aspirin Reduce Risk Of Death From Covid-19 Coronavirus? What This Study Really Said