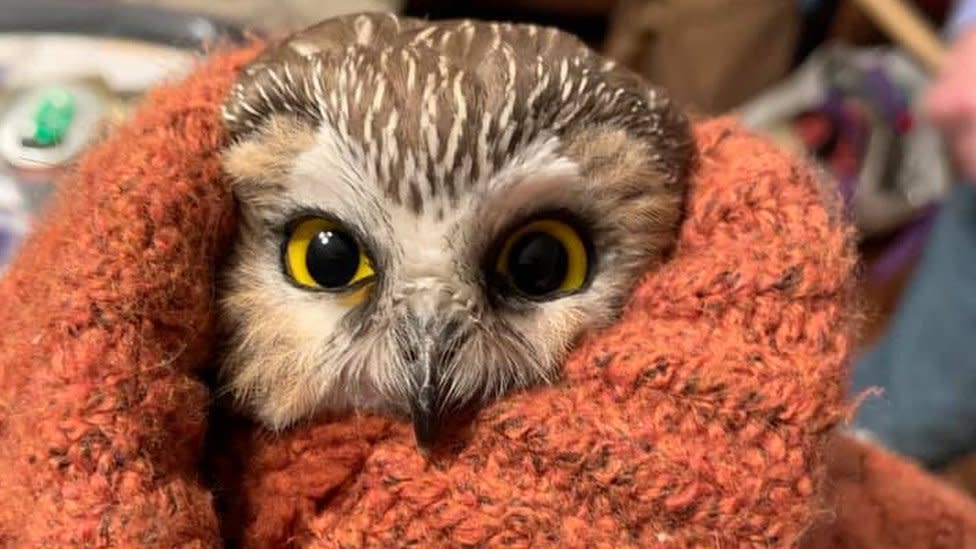 It’s been a big few days for a tiny bird.

A saw-whet owl is recovering at a wildlife refuge in New York state after it was discovered clinging to the Rockefeller Center Christmas tree.

The bird was found by workers helping to transport the spruce 170 miles from Oneonta, New York, to New York City.

“It’s just a story out of a movie,” said Ravensbeard Wildlife Center director Ellen Kalish, who is caring for the owl.

After the feathered stowaway – now named Rockefeller – was dropped off with Ms Kalish and taken to the wildlife centre, her team began giving him fluids and “all the mice he will eat”. Rockefeller had not had anything to eat or drink during his three-day road trip. “It’s amazing he didn’t get crushed,” Ms Kalish said.

Rockefeller was taken to the vet on Wednesday night for a check-up and some x-rays, but Ms Kalish said he appears to be in great condition considering his adventurous week.

“So far, he’s pensive and cautious. Very alert, bright-eyed,” she said. “And the cuteness factor is just off the charts.”

Despite Rockefeller’s diminutive size, he is a full-grown adult. Saw-whet owls like Rockefeller are the smallest owls in the US northeast, Ms Kalish said, typically growing to no more than 8.3in (17-21cm) tall.

“They’re a very interesting species,” Ms Kalish said. They are “very” nocturnal, meaning they’re typically not seen unless someone is looking for them. Some migrate south for the winter, and some don’t migrate at all.

Once Rockefeller has a clean bill of health, Ms Kalish and the Ravensbeard team will release him back into the wild. “Our goal is to release any bird that can be released,” she said.

There are about two million saw-whet owls across the US, she said, so Rockefeller will be ok if he doesn’t make it all the way back to Oneonta. “They find a new mate each year and go on with their lives,” she said.

With all the bad news of 2020, this tiny owl’s rescue “was a story that needed to be shared”, Ms Kalish said.

And plucky little Rockefeller the owl has lit up this year’s Christmas tree with some positive publicity.

Social media users had a hoot this week mocking the 75ft (23m) tree for its “sparse” appearance, with some calling it an appropriate tribute to a year to forget.

'It's not how I wanted to go out': Chris Krebs, the election security official fired by Trump, opens up in new interview and dismisses 'farcical' claims of voter fraud