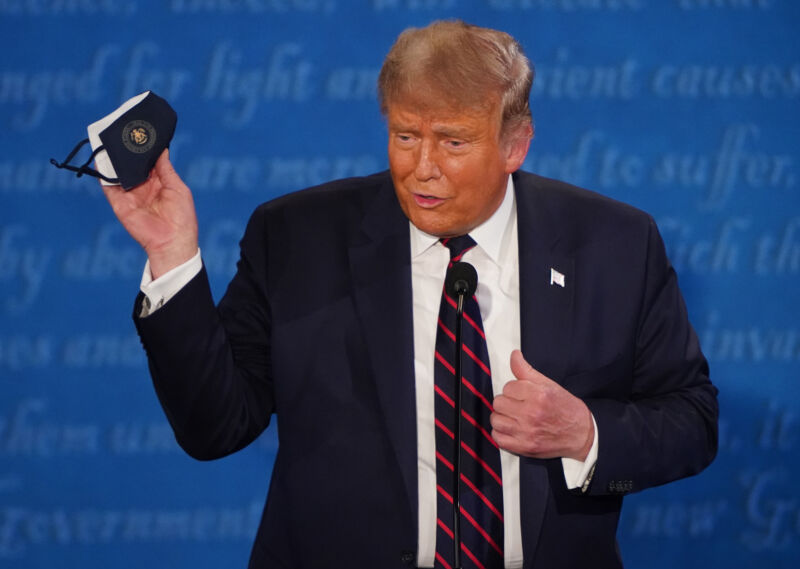 Enlarge / US President Donald Trump holds a protective mask during the first US presidential debate hosted by Case Western Reserve University and the Cleveland Clinic in Cleveland, Ohio, US, on Tuesday, Sept. 29, 2020.
Getty | Bloomberg

Update 10/2/2020, 5:30pm: Trump is reportedly leaving the White House and going to Walter Reed National Military Medical Center in nearby Bethesda, Maryland. In a statement, Press Secretary Kayleigh McEnany said, “Out of an abundance of caution, and at the recommendation of his physician and medical experts, the president will be working from the presidential offices at Walter Reed for the next few days.”

Update 10/2/2020, 4:45pm: Trump is reportedly experiencing low-grade fever, nasal congestion, and a cough from his coronavirus infection. The White House released a statement from physician Sean Conley, who is treating the president, saying that Trump has received a high dose (8 grams) of an experimental antibody cocktail made by Regeneron. This week, Regeneron issued a press release stating that such high doses of its antibody cocktail appeared to cause virus levels to decrease more quickly in patients who were not hospitalized for their infection. The full data has not been published or released, and the information available so far is not enough to determine if the treatment is effective.

The revelation, while stunning, is perhaps not surprising. Trump has consistently downplayed the pandemic virus and the disease it causes, COVID-19, as it smothered the globe and ravaged the US. More than 7 million people in the US have tested positive for the virus and nearly 208,000 have died. Yet in public appearances and packed rallies prime for disease transmission, Trump has not followed physical distancing and has rarely worn face coverings.

According to some of his closest aides, Trump began exhibiting symptoms on Wednesday. The aides, who spoke with Bloomberg News, said Trump seemed exhausted and abnormally fatigued. Fatigue is among the most common symptoms of COVID-19, along with cough, fever, muscle pain, sore throat, shortness of breath, and headache. The New York Times has since also reported that Trump was lethargic Wednesday and Thursday and that he has experienced “coldlike” symptoms.

Trump’s positive test came quickly after news that top presidential adviser Hope Hicks had tested positive Thursday. According to reports, her illness was suspected since Wednesday as well, and she is also exhibiting symptoms.

It’s unclear how and when Trump became infected. The incubation period for the virus—the time between when a person is infected by the virus and when the person exhibits symptoms—can often range from two to 14 days, but it may be as long as 21 days. The mean incubation period is around six days. 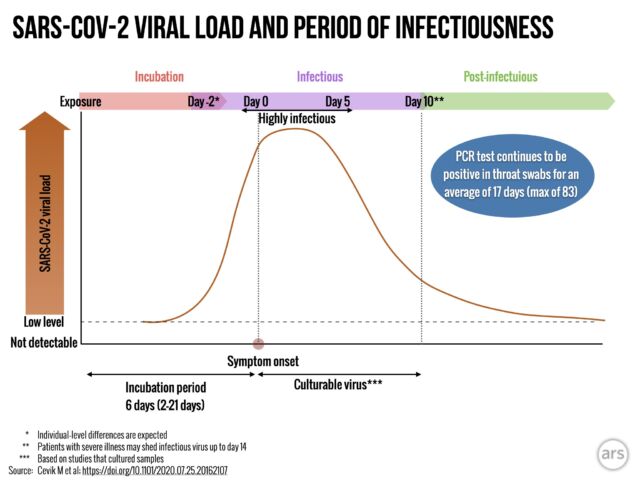 But the onset of symptoms provides a critical data point to assess the course of Trump’s infection. According to a systemic review and meta-analysis of COVID-19 data, people infected with the virus are typically most infectious about one to two days before showing symptoms and about five days after symptom onset. Infectiousness appears to peak right around the onset of symptoms. That’s when levels of SARS-CoV-2 genetic material are highest in the upper respiratory tract.

The data solidly suggests that at least Trump and Hicks have exposed many White House staff, officials, and supporters to the pandemic coronavirus this week. The two both traveled to a rally in Minnesota Wednesday, and the president attended a fundraiser in New Jersey on Thursday, at which he reportedly came in contact with about 100 people.

In photos taken Wednesday, Hicks can be seen walking and talking with a host of White House staff—all maskless—as they boarded Marine One together. The staff included presidential assistants Nicholas Luna and Dan Scavino and advisers Jared Kushner and Stephen Miller. 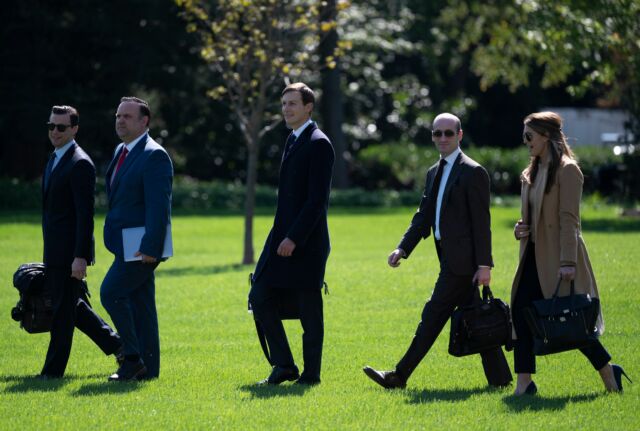 Trump and Hicks were also likely highly infectious during the presidential debate Tuesday night in Cleveland, Ohio. Trump family members and staff did not wear masks at the debate, which was hosted in part by Cleveland Clinic and required masking. According to CNN, a Cleveland Clinic doctor approached Trump’s entourage and asked them to put on masks, which the doctor offered to them, but the group declined.

Democratic presidential nominee Joe Biden and his wife Jill Biden were tested Friday and found to be negative. A senior campaign official for Biden told CNN that no one from Trump’s campaign or the White House reached out to alert them of possible exposure at the debate.

Biden and his family and staff were reportedly wearing masks at the debate, and the campaign official said that the two groups were “never near” each other. The most significant risk of transmission is close, prolonged contact, generally defined as being within six feet for 15 or more minutes. However, researchers suspect that transmission can occur at longer distances when people are in crowded indoor environments with poor ventilation.

While continued testing will determine the extent of spread from and within the White House, the world’s eyes will be on Trump and how his infection will progress. The outlook is not rosy.

Already, Trump has symptoms, suggesting he is not among the lucky minority of people who never develop symptoms during the course of their infection. Moreover, Trump is in a high-risk group for severe disease and even death: He’s male, 74, and clinically obese. (His body mass index is 30.5, and anything over 30 is considered obese).

Males have higher rates of hospitalization, admissions to intensive care, and deaths compared with women. Risk of severe disease and death also increase with age and obesity. Having a BMI of over 30 can triple the risk of being hospitalized for COVID-19. In a June CDC study of more than a million cases of COVID-19 in the US, about 34 percent of people aged 70-79 required hospitalization, and about 17 percent of that group died. For those in the 70-79 age group with an underlying health condition, such as severe obesity (a BMI over 40), rates of hospitalization and death were 65 percent and 32 percent, respectively.

Trump also has a history of high cholesterol and is on a statin medication to lower it. Recent data suggests that statin use may reduce the severity of COVID-19.

For now, the CDC and other public health officials recommend Trump and other infected people undergo at least a 10-day isolation period. Trump has tweeted that he will begin a quarantine process, however quarantines are a means to separate or reduce the movement of people who are merely exposed to an infection but are not yet sick. People in Trump’s sphere who have come in close contact with him during this week should quarantine and be tested, regardless of symptoms. Additionally, the CDC recommends continuing a 14-day quarantine even if a test comes back negative in case testing is done too early during an incubation period and disease develops afterward.