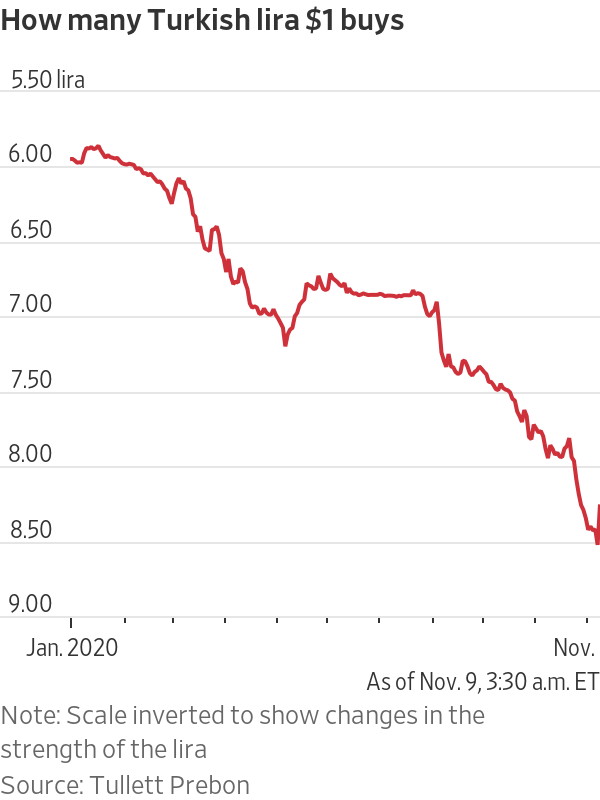 The Turkish lira, one of the worst-performing emerging-market currencies this year, soared against the U.S. dollar in early trading Monday after a surprise weekend shake-up that saw President Recep Tayyip Erdogandismissing the governor of Turkey’s central bank and the finance minister announcing his resignation.

The lira gained as much as 4% when currency markets reopened, standing as strong as 8.18 against the dollar, compared with a close of 8.51 on Friday, on investor expectations that the new governor, Naci Agbal, would raise interest rates to combat inflation and support the lira.

Mr. Agbal, who was named governor on Saturday in place of Murat Uysal, said in his first statement on Monday that the monetary authority’s primary goal was to maintain price stability and hinted that the central bank might take action before its next policy meeting on Nov. 19.

Until then, “the current situation and expectations will be reviewed, developments will be closely monitored,” he said. “And necessary policy decisions will be made with the available data and final evaluations.”

“If he doesn’t hike, then we’re back to where we were and there was no point in firing the governor,” Timothy Ash, senior sovereign strategist covering emerging markets at BlueBay Asset Management.

Meantime, the fate of Turkey’s finance minister, Berat Albayrak, who is also one of Mr. Erdogan’s sons-in-law, remained unclear.

In a surprise statement posted on his Instagram account late Sunday, the 42-year-old minister said he was resigning, citing health reasons. But more than 15 hours after his post, most Turkish media hadn’t reported his announcement and the presidency kept silent on the issue.

Ahead of Mr. Agbal’s appointment, the lira had lost 30% of its value against the dollar this year, putting it on course for a devaluation worse than it saw in its last currency crisis two years ago.

One of the biggest concerns among investors has long been the independence of Turkey’s central bank, which continued to cut interest rates for much of this year, even as inflation grew.

Even before the pandemic hit, investors worried that a rising extension of credit to Turkish households and businesses would increase imports denominated in dollars and euros, weakening the lira, as citizens sold the lira and bought other currencies.