Zombies Could Stunt the Bank Recovery

A decade ago, Europe’s recovery from the global financial crisis was held back by the lingering bad-debt problems of its banks. History risks repeating itself.

Meanwhile, bank shares have been buoyed by optimism that Covid-19 vaccines will revive the economy and shareholder payouts will resume. The Stoxx Europe 600 banks index is up nearly 30% in the past three months, triple the main index performance and roughly on a par with the U.S. bank benchmark.

Following both the global financial crisis and the eurozone crisis, nonviable companies in Europe were kept alive by politicians worried about job losses and lenders hesitant to acknowledge bad debts. The zombies lowered markups, net investment and productivity in their markets as well as inflation in the wider economy, according to a recent report from the Federal Bank of New York—problems that have come back to bite their lenders too.

Pandemic support programs, such as loans and bankruptcy moratoria, aspire to give businesses the time needed to secure their finances and pivot operations to better serve pandemic and post-pandemic customers. Sometimes, though, the support simply provides cheap funds that help unsustainable companies limp on. It is very hard for policy makers to get the timing right on these programs: Rolling back too early could hurt viable businesses, but too late can create zombies. 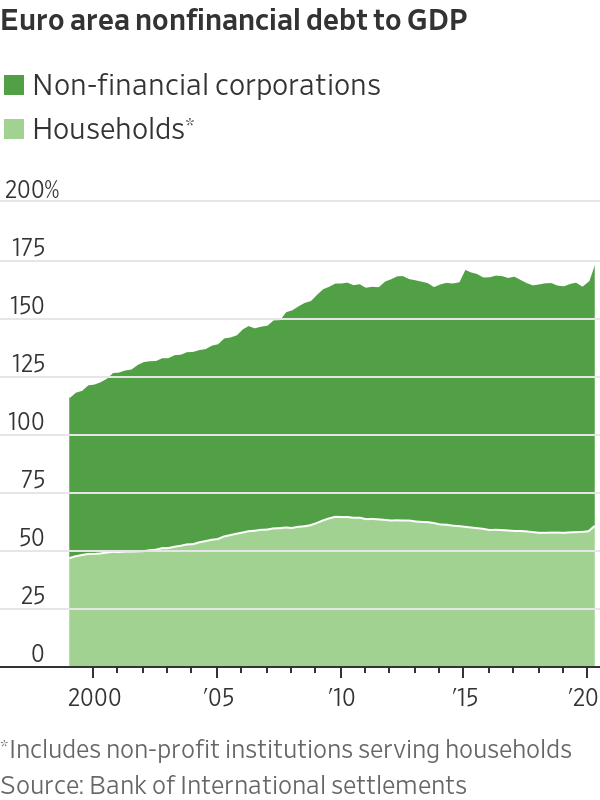 Corporate and household debt levels have been rising, though that isn’t necessarily a problem as cash levels are up too. New accounting rules aim to recognize loan losses earlier, but these estimates are art as well as science. Payment holidays make it particularly difficult to know who might be in genuine trouble, and much of the pandemic’s permanent damage will remain hidden until programs roll back.

Zombie firms aren’t exclusively a European concern. Chinese steelmakers and U.S. shale oil producers were two other problem markets identified in the New York Fed’s report. But U.S. bankruptcy rules are seen as good practice, having enabled banks to quickly clear up their balance sheets and get back to business after the 2008 crisis. U.S. shale investors are currently facing a reckoning.

The first word on what Wall Street is talking about.

European Union officials have tried to harmonize national bankruptcy rules and create bad banks to take failing loans off lenders’ books. Unfortunately, progress has stalled. An acute loans crisis might compel Europe’s national leaders to act more quickly, as it has in prior ones.

On less than 0.6 times forward book value, the average European bank share is still cheap by historic and U.S. standards. Yet valuations now have a bit of hope built in. Some are even raising the prospect that lenders could reduce last year’s loan-loss allowances, boosting profits.

The short-term risk for investors may be that lenders move aggressively to sweep away zombies as conditions normalize this year. For the long-term health of Europe’s economy and banks, though, this clear out shouldn’t be delayed.